« Mistaken Identity and the Kindness of Strangers | Main

Two years later: creaking door opens on shadows, dust, and things scurrying away from the light…

Yeah, two years sure can fly by, but thanks to Kaylynn Hills, I’m back. Kaylynn invited me to join this blog tour on the writing process and gave me a good reason to visit my long-neglected blog. Kaylynn is a new student in the Arcadia University MFA in Creative Writing program, where I teach fiction writing, and we’re very happy to welcome her aboard. You can read her entry to this blog tour here.

What are you working on now?

I’m writing a novel for younger readers—YA by definition, I guess, because it’s not aimed at midgrade readers (approximate ages 8–12), but I definitely have kids in mind. These lines can get fuzzy, as they should be. The book is a supernatural adventure story (in the creepy/scary end of things), and it’s the pursuit of something I’ve wanted to do for years, being a fan of children’s literature and ghost stories. It’s also a return to my roots as a creative writer, back to the days when I couldn’t get enough Stephen King or Clive Barker. And the love of these things—horror novels, horror movies, and such—has never left me.

In the novel, a son enduring his parents’ divorce finds himself faced with saving his father from being pulled into a shadow world when the boy’s father moves out of the family home and into a little house in the woods. The house and the woods have a haunted history going back to colonial times—a history involving a secret society, the power-obsessed man who founded the society, the mirror world the society’s founder created in this place, and the people who have been drawn into this shadow world in the years since.

I’ve got another couple of novels in the works, in the larger, less-active-at-the-moment sense: one about the fictional making of a Nazi propaganda film and another about an old, troubled friendship between two men that spans their youth and middle age, a story told in pieces of road trips from the book’s past and present. These books fall under the “literary” heading, like my first novel—a category I have to wrinkle my nose at as vague and sort of snooty. But I’ve gone on record before that I think all of those categories are better used for stocking shelves, not something people making up stories should trouble themselves too much about.

How does your work differ from others of the genre?

And now that I’ve said I don’t think fiction writers should give too much thought to genre, let me answer this question in the only way I can—and I swear I’m not trying to be a mystical pain in the ass about this. I hope that my work in this present novel or any novel offers a style and reading experience particular to books with my name on the front cover, moment by moment and from start to finish. I hope that this experience on my pages is rich for readers—vivid and fascinating, honest in some larger human sense no matter how far-fetched the premise. I hope that in my efforts to tell compelling stories—wrangling narrative and character and place and time and life and death—I’m offering things worthy of a reader’s attention, as he or she engages me in this meeting of the minds on paper (or on screen), where each reader does his or her part and I do mine.

Why do you write what you write?

The eternal question. The easy answer is “Who the hell knows?” But that’s more flip than I want to be and at least a bit of a cop out, though at some psychological level, I stand by it. Another answer, almost as handy and also valid in an overarching way, is that I write about things my fancy attaches itself to, and I like to think the possibilities are pretty wide open. There’s no question that I’m often drawn to darker materials and that my writing shows a certain morbid fixation. I’m also drawn to write about situations with interesting psychological layers—people, places, and circumstances full of potential complexity in terms of perceptions, beliefs, relationships (interpersonal connections, power relations, etc.), and the baffling absurdity of being a primate on Earth with all sorts of hopes and dreams.

How does your writing process work?

In my writing process, both for short stories and novels, I find that I usually start with a beginning, an ending, and wildly varying notions of what should happen in between. The ending gives me a target to shoot at, a general direction, and though not set in stone from the outset, my endings usually land about where I planned. The journey there, short or long, is much more subject to change.

I don’t do any outline work for short pieces and write few notes. For novels, I keep a notebook where I jot down things that pop into my head—plot points; additions to things like backstory and character profiles; some brief story moments that feel so vivid to me, I’m afraid I won’t be able to capture them again in the same way if I wait to write them; etc. I sometimes ask myself questions in my notebook (add a jive-talking robot?). And like any notebook, it’s generally a place I try to mitigate the disarray and decay of my thoughts and notions about a story from day to day. I outline at times while writing a novel, but only periodically, and in a fairly loose way: I list a series of things I want to occur in the story without trying to put them in order of appearance in the book, then sit back and number them in a way that seems to make sense at that moment in the manuscript. Sometimes these quick sorting outlines only take me to the end of the next chapter, sometimes to the end of a larger section of the book, sometimes right to the end.

One thing I’ve tried to scale back in my process is editing as I go. I used to edit obsessively while still composing a draft, polishing and polishing things, greatly slowing down my progress to a finished manuscript. Now I try to keep the new pages moving faster, rereading as I go to reorient myself, making changes here and there (and bigger ones if they absolutely seem necessary), without spending too much time hovering on already written pages before reaching the end. It’s an ongoing process, which works better on some occasions (read “occasions” as days, weeks, months) better than others. And I’ll probably never achieve my Zen fantasy of writing an entire draft with hardly an edit along the way, saving all of that polishing for the complete manuscript before me. What a glorious thought—actually gives me chills.

Next up on the tour: Daniel DiFranco 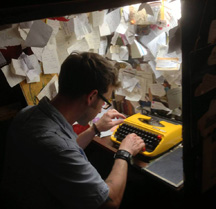 Going from a new student to a graduate of the Arcadia MFA program, I’m very pleased to pass the baton on to Daniel DiFranco, one of the most talented and hardest working students I’ve had the pleasure and good fortune to work with.

Daniel DiFranco lives in Philadelphia. He teaches high school English and music. He plays in a band. He likes short, clear sentences. He often throws in a longer clause to balance out the rhythm of a paragraph.

His work has appeared, or is forthcoming, in Philadelphia Stories, Crack the Spine, and Wyvern Lit. He graduated from Arcadia University with an MFA in Creative Writing in June 2014. He loves to travel, and learned the hard way that there is no peanut butter in Europe.

Daniel will be adding his post to this blog tour in about a week. In the meantime, check out Daniel’s blog at http://www.danieldifranco.net/thinkings.

The comments to this entry are closed.